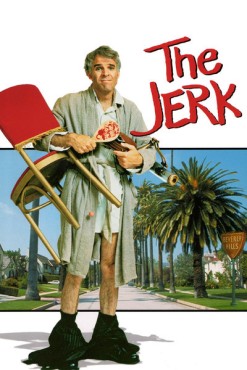 Last night, Jacob and I had plans to go out and see a movie, but we were so tired from our respective days that watching a movie at home in our comfy clothes seemed like a way better option. We watched The Jerk, a classic American comedy starring a young and very adorable Steve Martin.  Released in 1979, the movie is imbued in an aesthetic I love. Just check out this sweet outfit on Steve Martin.

But this movie is so much more than the fashion, cars, and lifestyle of the times.  It’s about the the rise, fall, and eventual stability of Navin R. Johnson, who leaves his family home to make a name for himself.  With a lot of luck and naive charm, Navin is employed as a gas station attendant, then as a weight-guessing carnie, and finally as an inventor-millionaire in LA.  During the movie, he finds himself hunted by a hit man, dangerously coveted by a motorcycle stunt babe, and in love with Marie (Bernadette Peters).  All the while, he writes letters home to his family about his (mis)adventures, and sends them whatever money he can afford to send at the time.

The movie moves at that classic 70’s slow pace, and part of it has to do with the humor.  As Navin, Steve Martin employs a lot of those jokes and bits that turn on prolonged repetition, lists, and explanations.  What is obvious and usually unstated by normal folks, is instead drawn out dramatically and comedically by Navin. Somewhat related, Steve Martin is so good at moving, walking, talking, looking like a funny man.  His posture, movements, and facial expression are as much a part of the joke as the words themselves.

I loved the romance in this movie between Navin and Marie.  It is lovely, but just like any epic romance, it is not without its flaws.  Marie, for all her sweetness, is also a materialistic cosmetologist who has promised her mother and herself that she would only marry rich.  Navin, who is so naive and seems incapable of being awful, knowingly cheats on his motorcycle mama and lies to Marie… this is the messy beginning of their relationship. Despite their faults, I couldn’t help but root for these two throughout the movie.  The scene where they stroll on the beach at night singing “Tonight You Belong to Me” is super-duper-corny, but also it’s an intimate moment, dressed down and simple, but significant. Another significant scene in their romance is when they are at the height of their lavish lifestyle, disco dancing right before the pivotal moment that leads to Navin’s downfall.  Their dance moves are complicated and impressive–it was so cool to see what these two actors were capable of in their youth.

I also loved that one of the takeaway messages I gleaned from the movie is the strength of family.  Navin’s rise to success was uncalculated and misguided.  Although his experiences in the world without his family were important and transformed Navin from a naive youngster to a man who knows a little bit better… Ultimately, Navin would be down and out homeless without his family.  His father, who has smartly invested all the money that Navin sent home, has provided a comfortable and happy life for the rest of the Johnsons.  Marie, who despite having been left by Navin, still loves him and wants the best for him, and seeks out his family to rescue him.  Navin and Marie could not have lived happily ever after if it weren’t for the stability and support that Navin’s family provides.  Navin is lost without the help of his mother and father to guide his good intentions into actions that make sense.

I liked this movie a lot.  It was slow-paced, but the humor was top-notch and the messages about love, family, and the dangers of success were well-delivered.  I liked the song Navin sings about picking out a thermos.