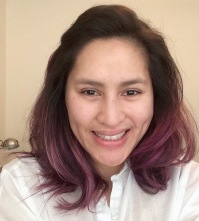 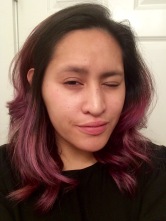 I never thought that I would grow the tits to ever dye my natural raven waves, let alone dye it a crayon color. Gotta admit, there is a creepy preciousness I like about the term “virgin hair.” But a timely Groupon and the talented folks at a nearby hairdresser academy helped my hair lose its v-card, hardcore. Took seven hours.  I requested four dead inches be chopped, they bleached my hair to a level 8 (this took the longest time), and mixed a custom color just for me.  In my head, I called the hue “The Karen,” but then (still in my head) re-named it “Purple Reign.” Thanks, Prince and Future.

I always loved how purple-y brunettes looked.  But it wasn’t until I saw the look on Rashida Jones’ tan skin in the last season of Parks & Rec that made me think, “Hey, I could maybe rock that look!”… and then I spent an entire year and a half mulling it over. It’s weird how I can, for example, eat a pig’s eyeball without batting an eyelash (true story), but for other things… The inside of my head is a weird place. The cycle of thoughts regarding the subject of hair color would begin with me considering it, then convincing myself I couldn’t pull it off because I rarely heat-style my hair and it would look trashy… Then I would remind myself I know how to make my hair look nice even without heat styling… and then I would remember how the upkeep costs money I can’t earmark for stuff like this… and then I would just say “fuck it!”…. but then I would just be too hesitant or too poor or too whatever to actually go for it.

But this time, I went for it.

There’s this magical time of the year called “Early January.” During this time, businesses take advantage of the need for change and excitement that permeates the air after all the confetti settles. More so than usual, Groupon becomes this cornucopia of deals that make certain luxuries accessible–so accessible that you don’t even feel ashamed for saying corny things like “cornucopia of deals.” Because man, what a bounty. Gyms want to help you become the New You, and hair places want you to get that new ‘do!

And so.  People toss their pessimistic outlooks into the garbage and remind themselves that they can Make It Happen, that this is THE YEAR. For everything! Some people hate it, but I think it’s wonderful. I love this time of the year. Not only for the deals, but also because I feel a sense of camaraderie – I am one of those people most days of the year. Hungry for deals and self-improvement.

Sure, I’ve been scared, tired, frustrated, depressed, stagnant many times over the course of my adult life. I’d like to think it’s common to see yourself as a complete and utter failure sometimes. But I can never stay too long in this place. I know that if I don’t force myself to move out of a comfort zone, or try to achieve a goal, that life will eventually pass me by and I won’t have experiences that help me learn and grow.  Plus, people like me who try and fail constantly need to believe in the power of relentless effort. Not only that, but I’d probably devolve backwards and re-become the person I used to be, who I stopped wanting to be a long time ago.  That person let fear, hate, distrust,  and an “acceptance of nothingness” rule her life.  That person smoked too many cigarettes.  And hated herself. I’m not really about that anymore, and haven’t been since my early 20’s. It’s been more fulfilling to try my best to be a part of this world, instead of be apart from it.

So, anyway.  This is the year I finally dyed my hair purple.  And I’ve also been kicking ass with all the effort I am making towards passing the bar exam.  At the end of every day I think, “how the fuck did I just do all that?” But I’ve also been intentional about my relaxation time after all that boulder-pushing.  I don’t really go out or talk to a lot of people, and kinda like it that way.  I am setting aside time to read my non-law books, and have re-instated weekly Bath Time. I share a home with my wonderful boyfriend (hi Jacob!), who is so helpful, kind, and supportive, even with all the huge things going on in his blossoming career. And I’ve been going to the gym 3x a week since January began.  I was going 5x a week for my fitness bootcamp in October, but doctor’s orders dictated I slow down because of my car accident injuries, and then holiday season set in and… well, that was all last year.

This year… I just have this feeling that 2016 really will be different, in a big way.  It’s more than a feeling, I know there is something real here.  And I can see the changes happening. I mean, for one thing, my hair is purple now.  So whats good fam?

One thought on “Purple reign”